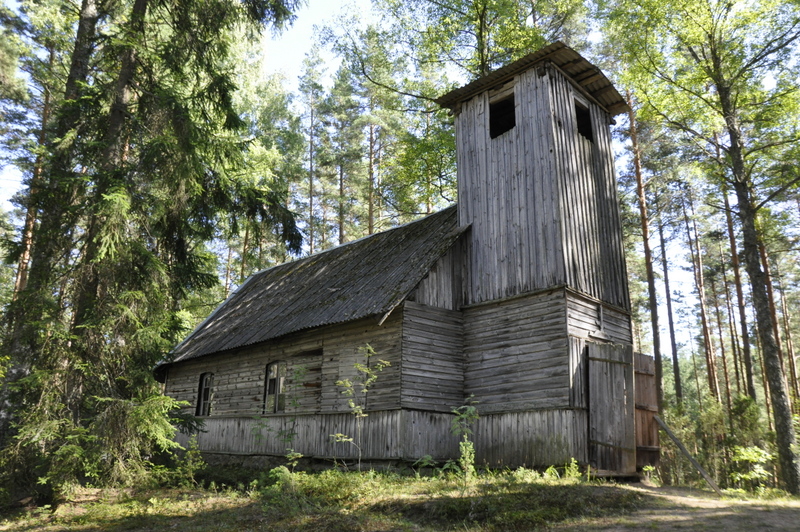 Vanaajamaja in cooperation with the Estonian Heritage Board initiated conservation works of this tiny wooden Orthodox Church in South-East Estonia, close to the Russian border in 2015. The church is not in the active usage and the state of the building was dilapidated at that time, but it has essential place in the identity of local community and important part in the local history. There is a tiny village graveyard on the church hill. The wooden church is not under heritage protection.

In the fall of 2015 the log walls were reinforced by the forestry students of Estonian University of Life Sciences under their practice lessons. In May of 2016 an international crew of volunteers from Estonia, Latvia, Slovenia and France restored the tower and changed the roof cover to wooden shingle roof . The works were coordinated and lead by Andres Uus.

Nine families form Irboska (present day in Russia) moved to live here in the 1920s. They bought farms, built up their households and sent their children to the local Loosi school. Soon the need for the orthodox church emerged.

One of the settlers donated a sandy hill for the site of the church and the graveyard. According to the descendants of the builders, the frame of the church was bought with the money collected by the families and material came from their own forests. Everybody, who knew anything of building, gave a hand. Orthodox congregations from Võru, Obinitsa and Petseri helped to equip the church. The insight of the church was generously decorated with ornaments and icons. The building is dated 1935, the cross was erected and consecrated in 1937 (1938).

One of the community leaders, Ivan Nosov, was literate (which was not so common in these times) and thus it was him who read the holy books and conducted everyday services for the congregation. On the great feast-days, the priest from Võru or Obinitsa came to conduct.

In 1930ies the hill was plain and sandy so that one could see up to the Russian border over the river of Piusa. The first deceased, Aleksander Grihin, one of the initiators of the church building, was buried under the only pine of the hill. In nowadays the hill is covered with pine forest and 35 people have found their last rest in the graveyard beside the church. The last one, Vassili Grihin, also one of the initiators of the building, was buried on December 4th, 2013.

During the soviet time the church stayed empty and quite fine, but in the 1980-90s was looted several times and nothing of the furnishing or decoration has remained. In 1986 the local community put up a new roof to protect the building and erected a new cross for the tower. During the times there have been four different bells up in the tower, the latter is preserved and is waiting to get up and ringing again.